Out in the hinterlands, where oil and gas companies have operations and critical infrastructure such as dams are located, there is an increasing demand for video surveillance. These locations need protection from theft and intruders who could cause harm.

The challenge is multipronged in these environments: 1) limited access to power sources 2) they are difficult to reach and manage; and 3) they are exposed to harsh weather and dusty conditions.

In order to meet the demands, Razberi teamed up with Ameresco, Axis and Milestone to address these three factors respectively.

Ameresco brings a new dimension to surveillance as a leader in renewable energy solutions. Acting as a technology partner, Ameresco designed a solar kit to help power Razberi’s ServerSwitchIQ™ Rugged surveillance solution that works with Axis cameras and other components. The kits would be offered based on the number of operating hours required per end user. Some locations based on budget, size and remoteness may not require 24×7 power solutions and can be tailored to leverage solar and battery power based on the application need. 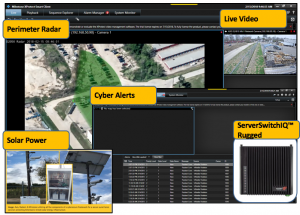 The pilot of the joint technology solution is physically mounted and working at Ameresco’s headquarters in Houston, Texas.

The companies are working collaboratively to address the growing challenge of operating surveillance reliably and cost effectively in remote, hard to reach places.

Find out more by contacting Razberi.